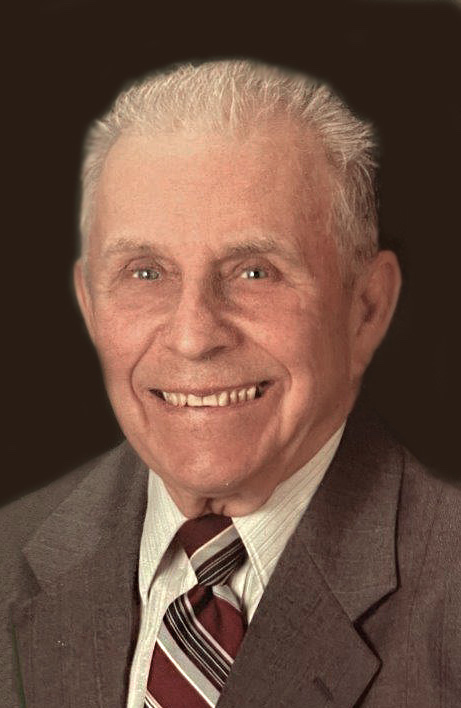 William Lusson, age 86 of St. Lucas, died on Saturday, Aug. 7, 2021, at Winneshiek Medical Center in Decorah surrounded by his family.
A Mass of Christian Burial was held at 11 a.m. on Friday, Aug. 13, 2021, at St. Luke’s Catholic Church in St. Lucas, with the Rev. Nick Radloff celebrating the mass.
Interment took place in the St. Luke’s Catholic Cemetery in St. Lucas.
Arrangements were entrusted to Schluter-Balik Funeral Home in Fort Atkinson.
Bill Lusson was born Dec. 12, 1934, at the family farm in St. Lucas, Iowa the son of Edward and Rose (Best) Lusson. He received his education at St. Lucas Catholic School.
On May 5, 1959, at St. Bernard’s Catholic Church in Alta Vista he married Irma Mae O’Donnell of Alta Vista. Irma and Bill worked side-by-side farming until her passing in May 2010. To this union of 51 years, three children — Dianne, David and Duane — were born.
Except for the time Bill spent stationed in Germany while serving in the United States Army, he spent his entire adult life farming the Lusson Family Farm west of St. Lucas. He took great pride in caring for the beautifully terraced farmland and his animals. In his later years he primarily fed beef cattle, but years prior he raised swine, sheep, laying hens, broilers, and even a few dairy cows. As he whittled it down to just his cattle, he took quite a liking for the many farm cats and especially his dog Goldie.
Bill loved going on road trips to buy cattle and look at the crops along the way. These adventures took him to places ranging from Oklahoma to Nebraska to Montana to throughout Iowa.

But, most of all, Bill loved his family, always making sure they were taken care of no matter what his circumstances. Bill’s genuine kindness was felt by his family and friends. He effortlessly planted this kindness and devotion, as well as his work ethic, into his family.
Survivors include his children, Dianne (Rick) Bushman of Seneca, Illinois, Dave (Amber) Lusson of Cedar Rapids, and Duane (Kellie) Lusson of Coralville; three grandchildren, Lucas (Mary) Winter, Tonya (Zach) Goodman, and Taylor Bushman; three step-grandchildren, Maya, Malcie, and Aiden; seven great-grandchildren, Emma, Maddie, Brady, Caroline, Quinn, Jackson and Bennett; one sister, Jeanette Miller; three sisters-in-law, Mary O’Donnell, Florence Reicks, and Margret Randak; and one brother-in-law, Jim (Charlotte) O’Donnell.
He was preceded in death by his wife, Irma; his parents, Edward and Rose; one sister- in-law, Catherine Dietrick; and three brothers-in-law, Denis Miller, Cyril Reicks and Bob Randak.