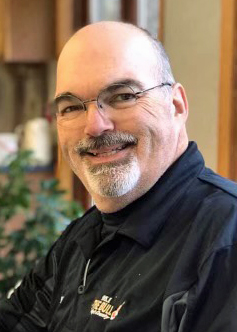 Robert “Bob” L. Svec, age 53, of New Hampton, passed away unexpectedly of natural causes Monday, May 31, 2021, at MercyOne New Hampton Medical Center.
Funeral services were held at 10:30 a.m. on Saturday, June 5, 2021 at First United Methodist Church in New Hampton with Pastor Willie Mafuta officiating.
Burial will be held at New Hampton Cemetery.
Visitation was from 3 to 7 p.m. on Friday, June 4, 2021, at Conway-Markham Funeral Home in New Hampton and continued at the church one hour prior to the funeral service on Saturday.
Online condolences may be left at www.conway-markhamfh.com. Memorials may be directed to the family.
Bob was born Aug. 18, 1967, the youngest son of Verne and Virginia (Wilson) Svec at St. Luke’s Hospital in Cedar Rapids.
As a child, Bob was often found riding dirt bike and as he grew he enjoyed playing the drums. He was a 1986 graduate of Marion High School.
After completing his education, Bob worked as a reserve officer for the Cedar Rapids Police Department before attending the Iowa Law Enforcement Academy in Johnston. Bob worked for Guttenburg and Cascade police departments.

While he was in Cascade, Bob met the love of his life, Jeree Claypool. The couple was united in marriage on April 16, 1994.
Immediately after their wedding, Bob and Jeree made the move to Clarinda where Bob spent the next seven years working for Clarinda P.D. While they were there they welcomed their son, Trevor.
The family would move to Lake Mills before making its home in New Hampton. Bob would finish his law enforcement career with the New Hampton Police Department and D.A.R.E. officer.
He retired in 2015 but continued to work with students at St. Joseph Community School and Immaculate Conception Catholic School in Charles City.

In the fall of 2017, Bob tried out his voice while DJ’ing at 95.1 the Bull. He quickly became a favorite in the area and earned his place on the morning show. Listeners could tune into their “Chubby Little Buddy, Bob,” and join in on the Chicken Dance during the 10 O’clock Tickle. Bob, along with others, successfully organized the “World’s Largest Chicken D ance.”
Though his community meant a lot to him, Bob’s family was his pride and joy. From cheering Trevor on in his activities or going for tractor rides with his father and brother, Bob rarely missed a moment.
He will forever be missed by his wife, Jeree; his son, Trevor of St. Louis; his parents, Verne and Virginia Svec of Cedar Rapids; his brother, Ray (Dawn) Svec of Urbandale; mother-in-law, Sandy Claypool of New Hampton; his brothers-in-law, Jeff (Kim) Claypool of Ottumwa, and Dan (Mindy) Claypool of St. Louis; and many nieces, nephews and extended family.
He was preceded in death by his father-in-law, Roger Claypool; his paternal and maternal grandparents and aunts and uncles.