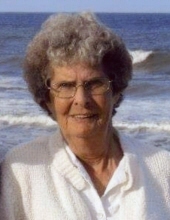 Patricia Annette Boehmer, age 82 of Nashua, died Monday, July 5, 2021, at the Chautauqua Guest Home in Charles City.
Funeral services will be held 10:00 a.m. Friday, July 9, 2021, at the Hugeback Johnson Funeral Home & Crematory -- Olson Chapel in Nashua with Rev. Sarah Namukose celebrating the service. Interment will follow at Calvary Cemetery in Charles City.
Friends may greet the family 4:00 - 7:00 p.m. Thursday, July 8, 2021, at the Funeral Home in Nashua. Visitation continues one hour prior to the service on Friday at the funeral home.
Patricia Annette was born on April 20, 1939, to Marion and Lois (Butterfield) Hoy in Charles City. She and her six brothers and one sister grew up in Charles City, where they attended school and learned the value of helping others.
Pat attended Charles City High School and then became a certified nurses assistant at the 9th Street Chautauqua Guest Home in Charles City, and she spent her career giving residents at the home the best care possible.
In the 1950s, she attended an outdoor movie in Ionia, where she met a young man named Richard Boehmer. The two hit it off and were married on May 5, 1955, and their family grew to include seven children.
The Boehmer kids had a mom who made the absolute best potato salad and the sweetest sugar cookies in the world, and Pat loved celebrating the holidays with her children. She and her husband always made sure their kids had a wonderful Christmas each year. Pat and Richard also loved to dance to the big bands that played at the VFW and Labor Center in Charles City.
Pat also loved her trips to the casinos and to the bingo halls. When she was younger, she bowled in several leagues, and as sweet as she was, she was a very competitive card player. You can ask any of her kids and they’ll tell you: Mom liked to win when she played cards.
She had 18 grandchildren, 43 great-grandchildren and four great-great grandchildren, and they will tell you that they loved going with Grandma to the bingo hall. It was Pat’s way of spending some great one-on-one time with each of them, and it’s a memory they will always treasure.
Pat belonged to the VFW Auxiliary, but her No. 1 priority throughout her life was her husband of 66 years, her children and the grandchildren. She brought joy to their lives, and they, in return, did the same for her. She will be greatly missed, but those who knew and loved Pat will always have memories of her and the contributions she made to their lives.
Pat is survived by her husband of 66 years, Richard Boehmer of Nashua; four children, Debbie Dankmeyer of Virginia Beach, VI, Richard Jr. (Charlet) Boehmer of Nashua, Bryon Boehmer of Nashua, Randy (Ronda) Boehmer of Waverly; 18 grandchildren; 43 great-grandchildren; four great-great-grandchildren; two brothers, Doug Hoy of Wisconsin, Roger (Sally) Hoy of Minnesota; one sister, Delores WoJohn of Charles City, IA.
She was preceded in death by her parents; three children, Connie Hamm, Brenda Boehmer, Darren Boehmer; four siblings, Melvin Hoy, Virgil Hoy, James Hoy, Buster Hoy; one brother-in-law Charlie Dankmeyer.