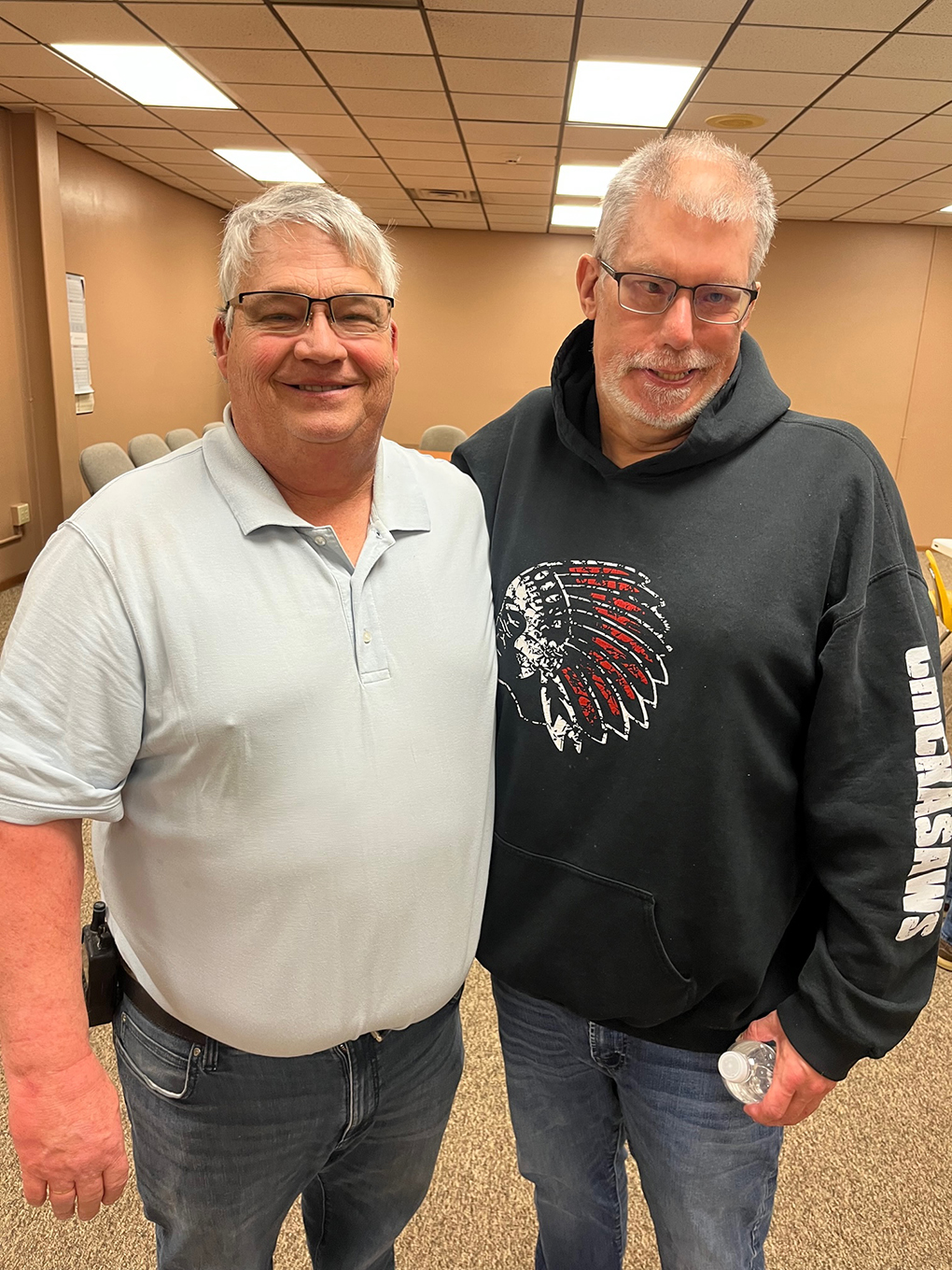 New Hampton Parks and Recreation Director Rick Kramer and the author of this column — "the strange guy taking pictures" — pose for a photo at an open house that was held to honor Kramer as he gets set to retire after 32-plus years with the city of New Hampton.

IT'S A MEMORY forever seared into my mind.

The date was Dec. 12, 2009, and I was six days into my New Hampton Tribune career as I made my way to the New Hampton Community Center for something called Breakfast with Santa.

It had been a hectic six days. I started work on the previous Monday, the same day the boys headed off to New Hampton Elementary School for the first time. The next day, a snowstorm that dropped more than a foot of snow on our new hometown, sent the boys home early from school and me scurrying to figure out where I had put the shovel.

The storm closed down New Hampton for much of Wednesday and Thursday so I hadn’t gotten out and about to meet people, like the Parks and Recreation director, a guy named Rick Kramer.

So there I was on Saturday, Dec. 12, 2009, walking into the Community Center, and I did what I always do — I started snapping pictures.

A few minutes later, this guy named Kramer comes up to me and says, “Can I help you and why are you taking pictures of all these kids?”

I couldn’t help but laugh because it hit me why someone had come up to Kramer a few minutes before and said something like “who’s the strange guy taking pictures of kids?”

“Oh God, this doesn’t look good, does it? I’m the new editor at the Tribune,” I said, “and seriously, I’m just here to get pictures for Tuesday’s paper.”

It’s a story both Rick and I have shared consistently over the years, and while I may have scared a few people that day — oh my gosh, stranger danger! — I’ll always be grateful for Dec. 12, 2009.

It was the day I met one of the best friends I’ve had during my 57 trips around the sun.

THE FACT IS that we’re the proverbial two peas in a pod.

Rick and I are championship BSers. We love giving anyone and everyone grief. We, at least I hope people know this about me, care greatly about the place we call home. And we both think there’s tremendous value in having a strong parks system and a healthy recreation program.

I will admit that there have been times when I spent way too much time in Rick’s office, taking as much crap as I was dishing out. I will also admit that if I used all the pictures I’ve taken of Rick for this column, my camera would be shoved up … well, you know.

But there’s also this: When I’ve needed a kick in the arse — either professionally or personally — Rick Kramer has never been afraid to provide the boot.

“What in the hell are you doing?”

I’ve heard that so many times from Rick that I’ve lost count, but 99.9 percent of the time, he’s done what a good friend is supposed to do. He’s made me rethink the direction I was going. Sometimes, I’ve listened to him. Sometimes, I haven’t. And quite frankly, friends like Rick Kramer have kept me on the rails more often than not.

THERE ARE A few naysayers in the community, I know, that think Rick Kramer is all bluster and all talk. And they’ll tell you that this reporter gives him a pass too often.

So this next sentence will probably gall the hell out of them. Rick’s going to be a tough act to follow.

He cares passionately about his hometown in general and its parks and recreation in particular. Since I moved here, the list of accomplishments his department has achieved is almost endless. From the revival of Garnant Pond to the many additions at Mikkelson Park to the makeover at the New Hampton Municipal Pool to the TRIBE Trail, at least the first two-thirds of it, to the events like the Father-Daughter Valentine’s Day Dance and the annual Halloween Parade, I’d put our Parks and Recreation Department up against any in the state.

Look, it hasn’t been a one-man show, I know that. Tara Hackman, who will take over as the department director, and Laurie Marzolf were huge parts of the department’s successes, as was that guy who occasionally answered the phone or helped at the counter when Rick was soloing in the office and occupied with something else.

OK, that was me, and I may have overstated my importance in that last paragraph!

But what I’ve appreciated the most about the professional Rick is that — at least since I’ve known him — he’s always put kids and programs first. In a world of travel and AAU ball, he understood that every kid has value.

And I appreciate that.

FRIDAY, RICK Kramer will work his last day at the office that has employed him for more than 32 years.

Thankfully, for me at least, he’s not going anywhere. Wow, scratch that. I’m sure there will be more time spent with his kids — Scott, Travis, Nicole and Ryan — and his seven grandchildren.

But he and his wife, Donna (God help her; sorry Rick, I couldn’t get through this entire column without one smart-aleck comment), will remain in New Hampton, which means that in between visits to see Bryson, Addie, Fletcher, Lainey, Eden, Cal, and Jamie, his garage will be open.

And sometimes, I’ll walk in knowing I need a kick in the rear end and there’s a friend who’s more than willing to set me straight.

Farewell my great aunt, you were the best human