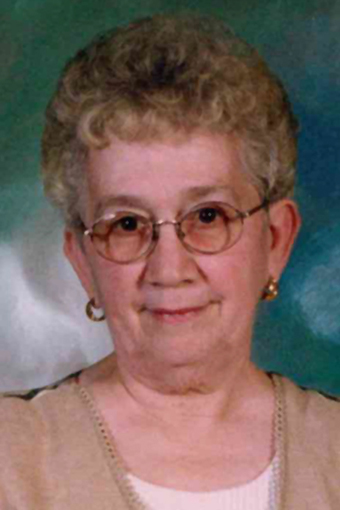 A mass of Christian burial will be held at 11:00 AM on Saturday, July 16, 2022 at Holy Family Parish in New Hampton with Father Jim Goerend celebrating the mass.  There will be a two hour visitation prior to the funeral mass at the Holy Family Parish gather space in New Hampton.  Burial will be held at a later date.  Online condolences may be left at www.conway-markhamfh.com.&nbsp; Memorials may be directed to the family.

Duffy was born September 22, 1931, the daughter of Stephen and Agnes (Roths) Adams on the family farm in North Washington.  She attended and graduated from North Washington High School.  After completing her education, Duffy worked at Holly’s Café in New Hampton for several years.  While at a dance in Lawler, Duffy met Walter Collins.  The couple were united in marriage on July 15, 1953 on the Adams family farm.  They made their home in New Hampton where they welcomed their five children, Steven “Spike”, Tom, Dennis, Rod and Shelly.  Duffy stayed at home with her children until 1967 when she began working at St. Joseph’s Hospital in housekeeping and laundry until her retirement in 1993.  Duffy and Walter enjoyed 42 years together until his death on April 9, 1996.

Duffy enjoyed camping in her earlier years, playing cards and some gambling which included trips to Waterloo, Branson and Las Vegas.  She was a member of Holy Family Parish.