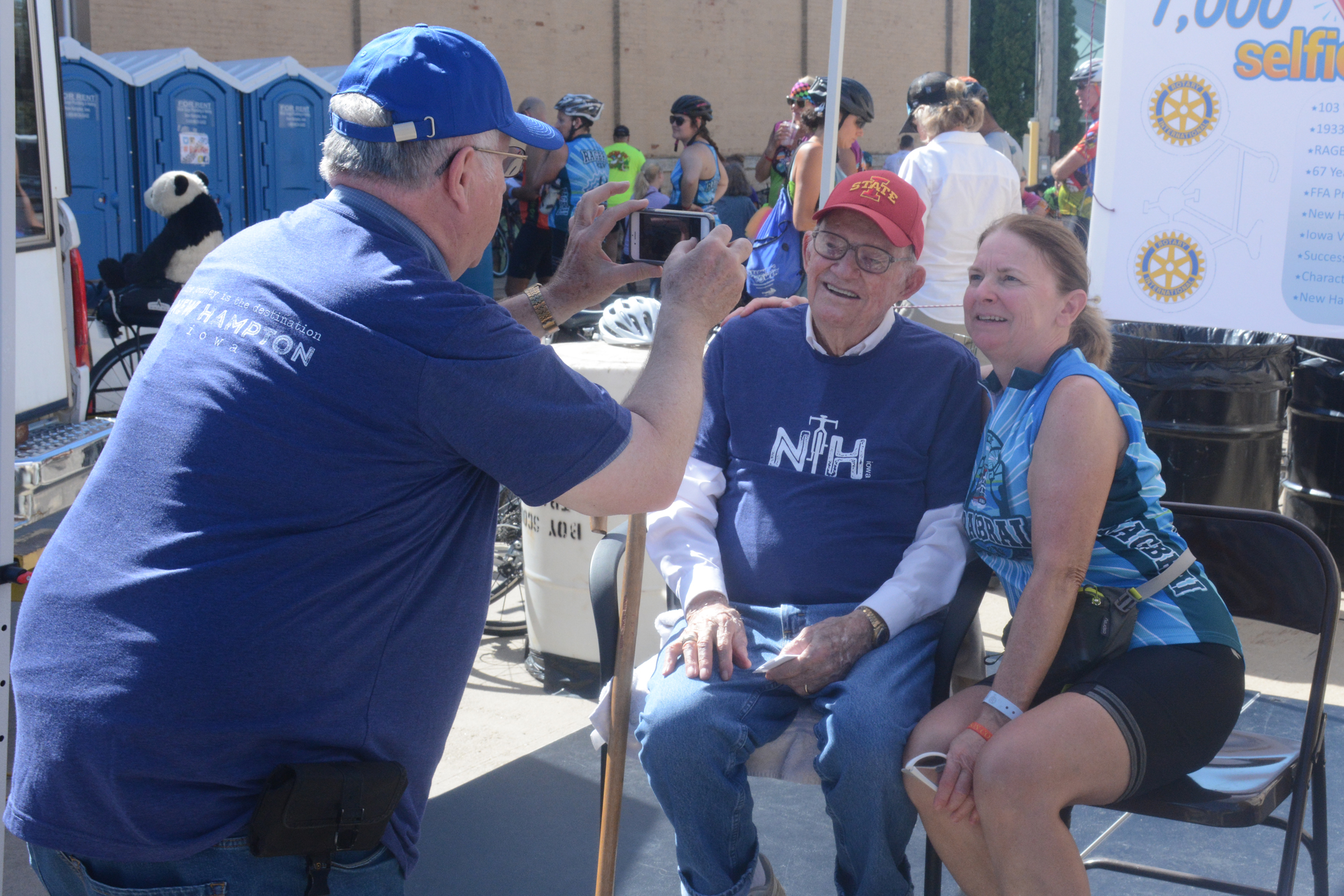 Bob Fenske/Tribune Paul Hassman, who was 103 at the time, poses for a picture with RAGBRAI rider Dawn Kirts when the annual bike ride made its way through New Hampton in 2017.

Paul Hassman and I sat next to each other near the scorer’s bench in New Hampton’s old high school gymnasium on a January night back in 2013.

His 1933 wrestling team, one that became the first Chickasaw team to win a state championship, was about to be honored before a New Hampton-Osage dual meet. The day before, Hassman had turned 99, and that night we were talking about that magical season and that state title run that included Hassman winning the individual 155-pound crown.

He was about to get up, and I couldn’t help myself.

“Oh wait, Paul, I have one more question,” I said and he waited as a sly smile crossed my face. “So, could you still make weight?”

He laughed and shot right back.

That conversation came back to me last Thursday when I first heard the news that the amazing life of Paul Hassman had come to an end. He was 108.

Part of me felt a deep sadness; after all, Mr. Hassman was a true New Hampton legend — a state wrestling champion, a successful businessman, a fantastic family man and, for many years, our town’s elder statesman.

He was believed to be the oldest resident of Iowa, and for those of us who always thought we’d live in a world graced by Paul Hassman, even with his age, the news of his death came as a shock.

Almost everywhere I’ve been since last Thursday, Paul Hassman has come up in the conversation.

For 108 years, he touched the lives of so many of us, and the people I’ve talked to used words like “gentleman,” “grace” and “amazing” as they talked about a man who remained so sharp for so long.

And even if we were talking by phone, the emotion in their voices was so real it was dang near palatable.

“He was such a gentleman, always a gentleman,” longtime New Hampton Rotary Club member Suellen Kolbet said, “and that’s one thing I’ll always remember about him. He was the kind of man who always held the door for you, who was always so sweet.”

She paused for a moment, and although Kolbet was talking to me from Florida, I knew a smile was forming on her face.

Rotary Club celebrates its members birthdays by having them say a few words. Oftentimes, members talk about their families, their children and their jobs, but on this day, when someone asked Paul how old he was, that wry Paul Hassman smile came into view.

All of us in the room lost it that day, but then again, Paul had a way of getting off the best one-liners — some of which are included in his obituary that appears in this edition of the Tribune.

But well past a 100, Hassman still had lessons to teach and values to instill in those around him.

Just ask Jim Russ, the New Hampton FFA advisor, whose organization’s motto is “Learning to Do, Doing to Learn, Earning to Live, Living to Serve.”

“He lived that motto, I think every day of his life,” Russ said, “and I think for my kids, for my students, he was that historical connection we all need. … When he met with the state officers in 2020, I remember they were on their way up and they were told, ‘He’s 105 or something like that so I’m not sure how long we’re going to be there.’ Two hours later, he was still talking, still, in his own way, teaching young people the value of FFA.”

His remarkable life began in 1914, and he was born less than two years after the Titantic sunk and more than six months before the start of World War I.

He saw the world change remarkably in his 108 years, and Russ laughed when he said that “I think my students learned that they really don’t have it as hard as they think they do after talking to Paul.”

Turn to Page 8 and read his obituary, because if you ever want to read about a life well lived, it’s there.

The obituary could stop at his retirement and it would have been an extraordinary life, but for many of us who only knew Paul Hassman as a man first in his 90s and then his 100s, we marveled at the zest for life he had as he neared and then passed the century mark.

“His mind was so sharp, and he was just so much fun,” said Bill Riley, who for years picked up Hassman and drove him to Rotary Club meetings. “You’d watch him play Scrabble, and you knew the competition was in real trouble. … Or you’d be in a room with him that was so calm, and he’d get off one of his one-liners, and he just slayed the entire room.”

Riley remembers one meeting in which someone was telling the story they had read about a Charles City woman who was in her 90s yet remained an incredibly active volunteer in her community.

If the wrestling meet story I started this column with isn’t my favorite Paul Hassman memory, then it would have been the RAGBRAI celebration in New Hampton.

Rotary set up a tent announcing that riders could have their pictures taken with the oldest resident of New Hampton, and hundreds of them stopped by, made a donation, had their picture taken and snapped their own selfies with our city’s legend.

He got more than a few pecks on the cheek, too, and late in the day, I walked by and he said, “Fenske, I think we might want to have RAGBRAI come to New Hampton next week, too.”

A minute before, I was hot, I was tired and I didn’t think anything or anyone could make me laugh at that point of the day.

His longtime friend may have said it best.

“The world just isn’t going to be the same without Paul,” Riley said in a voice chock full of emotion.

True that. But dang, you have to admit, Paul Hassman made the world a better place every day of his 108 years.

Farewell my great aunt, you were the best human