OK folks, what's up with yard signs and the need to steal them? 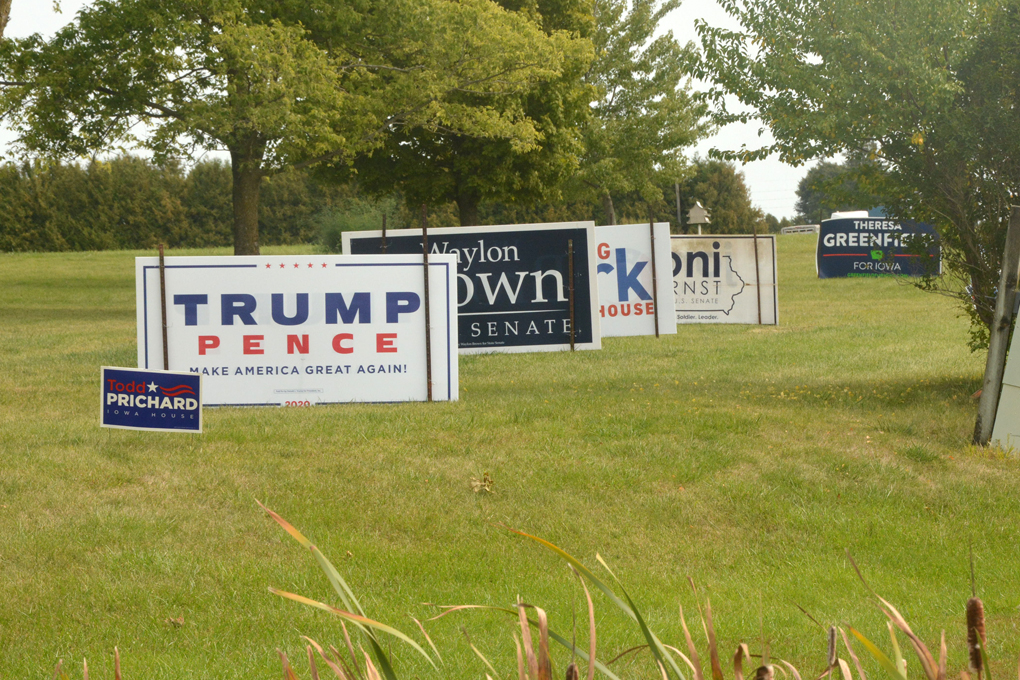 Somewhere in America, there is this large warehouse — I mean it’s the biggest in the world — and it’s packed to the rafters … with stolen political yard signs.
Seriously, this place has to exist, doesn’t it? I mean where else could all those signs be?
The 2020 election marks the 10th presidential race in which I can cast a ballot. You know, I like the sound of that. It makes me sound young. Ten. Really? You’re going to bring up there is four years between every election? You’re going to call me old? Seriously?
Whoa, I’m digressing.
My first presidential election as a journalist was 1988, the year Michael Dukakis decided to take himself out of the running by putting on a tanker’s helmet the wrong way. That was also the year Lloyd Bentsen told Dan Quayle that he was “no John Kennedy.”
I’ve often wondered if Quayle ever chided Bentsen after the election by saying something like, “Hey Lloyd, I may be no John Kennedy, but I am vice president. You?”
I watched Bill Clinton top President Bush (George H.W.) and Bob Dole, I watched President Bush (George W.) beat Al Gore and John Kerry. I covered — from the peripheral, mind you, the way, way, way peripheral — Obama’s run to the White House in 2008 when he beat war hero — yes, I said, war hero — John McCain and did the same when he won re-election in 2012 with a fairly convincing win over Mitt Romney.
Sorry, I’m going to digress here. Mitt? I’m not sure the U.S. was quite ready for a president named after a baseball glove, and I’ve always wondered if Romney’s parents really named their son Mitt. So I looked it up; it’s Willard Mitt Romney. President Willie? Maybe going by Mitt wasn’t such a bad idea.
Anyway, I also was there in 2016 when Donald Trump beat Hillary Clinton, and I’m still here, kind of covering Trump vs. Biden, two old guys duking it out for the White House.
So since I entered journalism, that’s nine presidential elections. Five have been won by Republicans. Four by Democrats. Yet every single one of those elections shares a common bond — stolen campaign yard sales.
From 1988 to 2020 and every four years in between, I have taken phone calls from Democrats.
“Those damn conservatives stole the signs I put up in my yard.”
And I’ve heard from GOP members just as often.
“Those damn liberals stole the signs I put up in my yard.”
Those conversations also have a common bond.
“You should do a story.”
I. Hope. This. Qualifies.
Seriously, though, I don’t get it. OK, I don’t get a lot of things, but this stealing political yard signs just seems kind of stupid to me. Well, actually, it just seems stupid.
With apologies to the candidates, so too, do yard signs.
I mean how many people are driving down the road, still wracked with indecision on this race or that race and then see a beautiful blue “Trump Pence” sign and have the proverbial light switch magically move to the “on” position?
“That’s a great looking sign,” the no-longer-undecided voter says, “I’m voting for Trump Pence.”
It. Doesn’t. Happen.
Yard signs are like political posts on Facebook. They don’t change the mind of one single voter, but hey, they’re tradition, and because I appreciate tradition, I’m cool with them.
Stealing? Not so much.
I mean seriously, what does the “stealer” do with them? Hide them in a basement? Use them as kindling? Send them to that gigantic warehouse?
The first contested presidential election race in this country took place in 1796, when John Adams and Thomas Jefferson — the two most influential members of the Continental Congress back in 1776 — duked it out.
I’m like as positive as I can be about something that happened almost 225 years ago that the editor of papers like the Tribune took complaints from readers about those “Jeffersonians are all a bunch of … they took my signs” and those “Federalists can’t be trusted because if they’re stealing signs from my yard, what’s next?”
The point of all this gibberish is twofold.
One, I want you guys to know that I find it as distasteful as you do that your signs were taken from your yard. It’s. Called. Trespassing.
Two, I want to find that warehouse, because in it is a treasure trove of political yard signs that might be worth a buck or two. Until they get stolen.