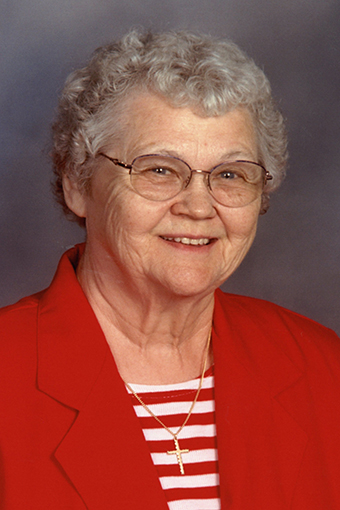 Funeral services will be held 10:30 a.m. Saturday, May 21, 2022, at Redeemer Lutheran Church, in New Hampton. Interment will be in the New Hampton City Cemetery. Friends may greet the family an hour prior to the service at the church on Saturday.

Hugeback-Johnson Funeral Home & Crematory in New Hampton has been entrusted with arrangements.  Online condolences for the Benedict family may be left at hugebackfuneralhome.com

Helen Arlene Benedict was born February 21, 1935, near Jerico, IA, the daughter of Ole and Celia (Ververka) Anderson. She initially received her education at a country school near the Jerico Lutheran Church, and then after her family moved to New Hampton, she finished her schooling at New Hampton High School, where she was a member of the Class of 1953.

After graduation, she worked at two grocery stores — IGA and Cutler Grocery — in New Hampton.

Helen then moved to Cedar Rapids where she spent her career in manufacturing — first working on the assembly line at the old National Oats plant before taking a similar job at Quaker Oats, where she worked until her retirement.

Although she never had children, Helen was an awesome aunt and an even better great aunt. She loved playing with them and always made time for them.

In her younger days, she loved to garden, go fishing and like to bowl, and throughout her life she was an avid reader of books and newspapers. Helen also loved animals, and she was especially close to her Shih Tzu named Missy, whom she treated like a queen.

Helen returned to New Hampton several years ago and moved into Kensington Place this past March.

She will be missed by those who knew and loved her because she always put others before herself.

She was preceded in death by her parents, her stepfather, Carl Njus; brothers, Norbert Anderson in infancy, Virgil Anderson and Jerry Anderson.